I’m a big fan of Dave McClure’s “Pirate Metrics” model, it’s both incredibly simple to understand and fundamentally relevant to almost any kind of business.

Most properties in the model are easy to implement with metrics systems – but one stands out: Activation, the 2nd “A” in “AARRR”.

Activation is defined by KISSmetrics as “the first point where you deliver the value that you promised”. Other ways of phrasing this moment is “when the customer has a fulfilling experience using your product”.

But saying this is one thing, defining it in a metrics funnel is something completely different.

What makes it tricky is:

Again looking at KISSmetric’s examples from Dropbox and Shopify, Activation is tightly knit to a controlled onboarding experience, where reaching the end would indicate a completed Activation.

But what if the customer bails out of this process, yet manages to have a fulfilling experience on their own? How do you capture that?

In Weld, the app prototyping tool we’re building, we currently use “created >10 elements” as a proxy for Activation. But that’s a weak proxy.

I will revisit this post when I’ve learned more. Stay tuned.

Update: A deeper understanding of “Activation”, re-defining and reverting the definition for Weld

The “Activation” metric is still bugging me, and I’ve reached some new insights. I had an interesting email discussion with Marybeth Alexander of HelpGizmo (an excellent knowledge base app we’re using for Weld).

First of all, the definition of Activation as “the first point where you deliver the value that you promised” is not necessarily very helpful. What if a user tries out all features in your app once, but never returns? I wouldn’t count that as “activated”. But then I re-read the KISSmetric article, and had a new insight:

Activation is pseudo-event that should happen to a user about half-way between signing up and becoming a paying customer. 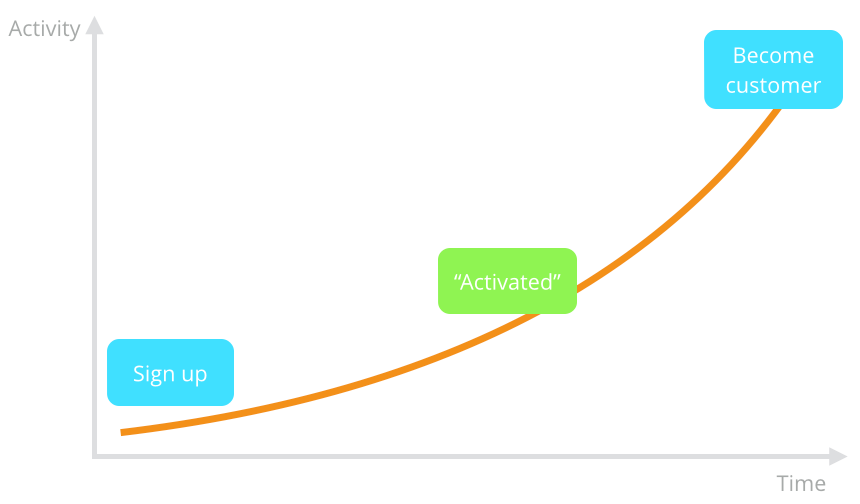 This made me think about activation in Weld once again. Since me writing the first version of this post, we had switched from “created X elements” to “performed action X, Y, and Z” to make sure our users understood our full value proposition. But testing a feature once doesn’t get you that much closer to becoming a paying customer. So now I’m leaning towards going back to the “created X elements” definition… Stay tuned!